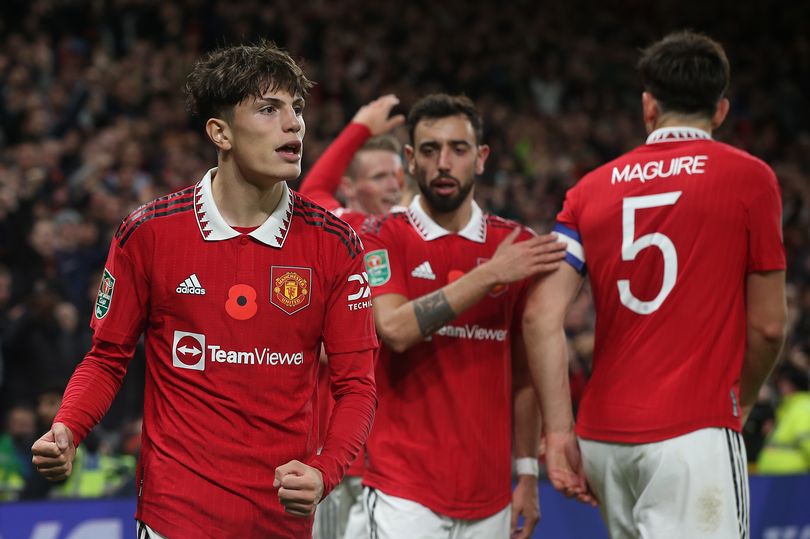 Gernacho and other Man United players during Aston victory

Red Devils advance into the fourth round

Manchester United has knocked out Aston Villa 4-2 in the Carabao Cup at Old Trafford on Thursday night to advance into the fourth round of the competition.

The first 45 minutes of the grudge match was boring, with occasional flashes from the Manchester United boys, which never threatened the visitors, who had defeated the Red Devils in a Premier League match 3-1 on Sunday.

However, the turning point of the match was in the second half, which never witnessed any dull moment, resulting in the six-goal thriller.

Manchester United’s turnaround was the introduction of their wonder kid, Alejandro Garnacho, who made the job earsier for Ten Hag 19 minutes to full time.

Aston Villa drew the first blood in the 47th minute through Ollie Watkinson, and got an immediate response from Anthony Martial a minute later.

United were dominant once the classy Christian Eriksen entered with Garnacho and Anthony Elanga with Villa 2-1 up (Eriksen and Elanga warmed up during the interval).

On an evening Ten Hag started without United’s four most important players, their midfield and centre halves were bypassed effortlessly by Jacob Ramsey’s pass and Ollie Watkins’ pace for the opening goal.

Lisandro Martinez received the loudest reception of the United substitutes, replete with a new chant to 2 Unlimited’s There’s No Limit, and his covering is as underrated an asset as his distribution.

With no Premier League football at Old Trafford until after Christmas, a sizeable crowd was present.

Villa sold out their allocation and their Little Englander contingent was in a reasonable voice, heckling Rashford with a perverse rendition of ‘you’re just a s–t Danny Welbeck’ when their own English forwards were not granted airport lounge access for the flight to Qatar. Rashford responded with a goal.

Prior to Eriksen’s entrance, the limited passing range of McTominay and Fred was patent, with the former failing to find Rashford in the 15th minute with a passing opportunity Eriksen would have passed.

Fred passed up umpteen opportunities to find an onside Rashford and when the ball was eventually played he was off.

Fernandes, darting inside, could not conceal his frustration at the limitations.

McTominay was not the only one improved by Eriksen. Ten Hag protected Martial on his first start in almost five weeks with his withdrawal 16 minutes into the second-half and whereas the changes a week ago against Real Sociedad were a hindrance, this time they were a help.

Rashford returned to the tip of the arrow and was this time sharp, seizing on a loose ball from Ashley Young’s challenge to nervelessly equalise for the second time after Diogo Dalot lucklessly deflected Bailey’s header into his own net. With Garnacho haring down the wing and Eriksen pulling the strings, United gained control and the crowd was stimulated.