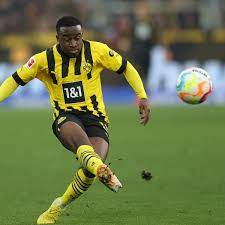 ‘Moukoko is the youngest player to reach 10 career Bundesliga goals’

The Borussia Dortmund 17-year-old striker, Youssoufa Moukoko, has been listed among other footballers to play for Germany in the forthcoming World Cup.

His other two promising teammates, Marco Reus and Mats Hummels,  did not make the 26-man squad released on Thursday by coach Hansi Flick for the Qatar tournament.

The inclusion of Moukoko in the German squad was based on his current form.

He has scored six goals and set up four more in 13 Bundesliga appearances this season.

AP reports that Moukoko is the youngest player to reach 10 career Bundesliga goals.

Last season, he was the youngest player to appear in the league.

“Momentum is on his side,” Flick said of Füllkrug, who was playing in the second division last season and had yet to play for Germany.

Before Flick named his squad, he referred to the human rights situation in Qatar and recent homophobic comments made by former Qatar player Khalid Salman, a World Cup ambassador.

“It leaves us speechless, stunned,” Flick said of the comments. “It just happened in the last few days. It’s extremely important on one hand that we as the DFB (German soccer federation) and the players clearly focus on the sports, yes, but of course we also have to address what the human rights situation is like in Qatar. We’ll have to keep our eyes and ears open there.”

Flick said that there was no question of just concentrating on the soccer and ignoring all the other issues.

He said that it was the team’s “job” to address them.

“We don’t want to duck away, but we want to draw attention to the abuses when they happen,” Flick said.