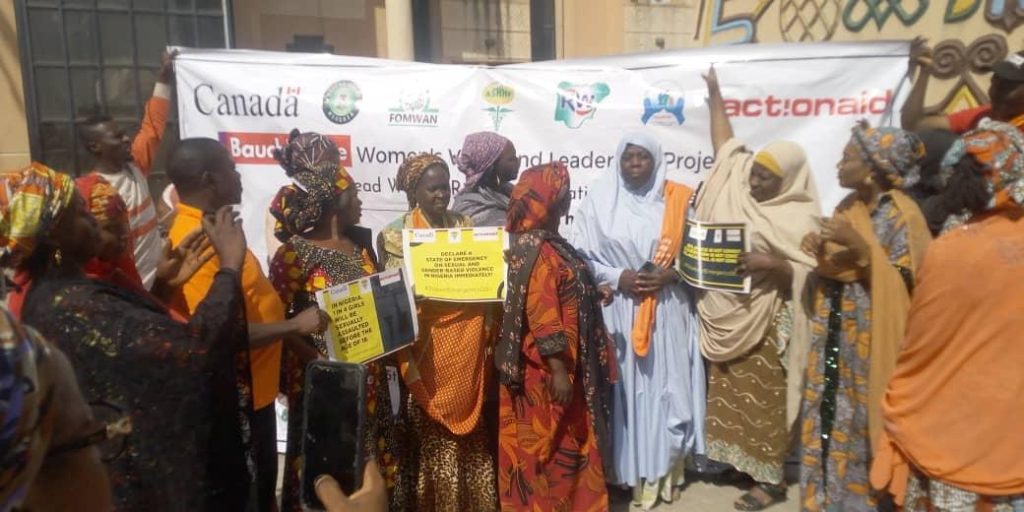 Members of the coalition after the event.

A Coalition of 16 Civil Society Organizations (CSOs) in Bauchi State has expressed alarm over the surge in divorce cases among young couples across the country.

They condemned the trend when they visited Emir of Bauchi, Alhaji Rilwanu Sulaiman Adamu, as part of activities to commemorate the 16 days of Activism Against Gender Based Violence in Bauchi.

The State Amira Federation of Muslim Women Association of Nigeria (FOMWAN), Hajiya Aisha Kilishi, lamented that the surge was worrisome to the society.

“The surge has been blamed on, among others, domestic violence, drug and alcohol abuse and infidelity.

“It’s always good that  warring partners seek elders’ intervention. Families have in the past few years been opting to seek the court’s guidance on their marital differences,” she said.

Kilishi however advocated for the empowerment of women, saying that the high rate of divorce in the society has made many women vulnerable to rape and other violence.

She also called on the government to appoint more women in leadership positions in the state so that the voices of women would be heard in the state.

Responding, the Emir, Sulaiman, expressed his concern over the divorce rate in the society.

“It is necessary for a man and a woman to observe and study each other very well before going into marriage.

“But more often than not, this does not happen and couples quickly get married as soon as they fall in love not caring whether the love is genuine or not,

“Which is why they put up the excuse of being incompatible with each other and seek divorce.” he said.