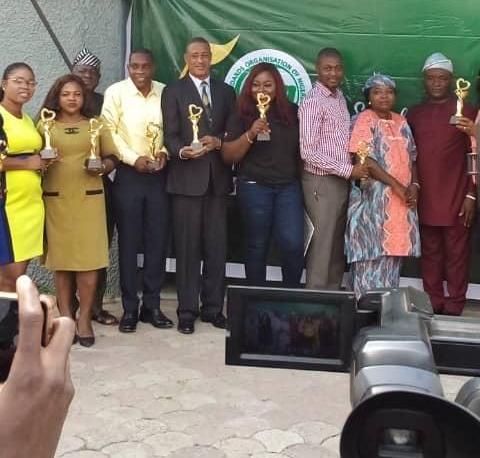 Officials at the event.

Exhibitors at the just-concluded Made-in-Nigeria Trade Fair, organised by the Standards Organisation of Nigeria (SON), have expressed delight with the three-day showpiece, appealing to the organisers to make it an annual event.

They argued that when the event became annually, it would help them play globally especially in African Continental Free Trade Area (AfCFTA).

The three-day Made-in-Nigeria Exhibition which took place between December 12 and 14 was part of the activities to mark the 50th anniversary of SON, which was celebrated recently.

The event held at the Lagos State Television exhibition ground.

Some of the over 110 exhibitors said that the exhibition enabled them to interact with one another and know the extent to which Nigerians were making effort to be self-reliant.

According to them, given the size of the Nigerian market, achieving self-reliance would not only strengthen and deepen the economy; but also would position the country to play a dominant role in continental market that had already taken off.

The leader of Dangote Fertilizer, a subsidiary of Dangote Group. Ifeanyi Osoego,  at the exhibition ground, said that he was impressed by the turnout of exhibitors at the showpiece which he said was at short notice, adding that if the organisers could make it an annual event more companies would be around to exhibit their projects.

Another exhibitor, a small and medium enterprise operator, Mrs Regina Imoisile, said the event was encouraging, especially given the fact that it was the very first time it was being staged.

“In short, it was very successful; it was indeed a good effort by SON,” she said. “As a matter of fact, I am saying that it should be a yearly event so that more people will come and showcase their products.  SMEs should be encouraged to come in and  exhibit because that is one of  the ways  to promote quality”, she said.

Imoisile said that she started small but her business has grown into bigger SME, adding that she would go beyond Nigeria and play in Africa.

A representative of Ayoola Farm Limited said that she liked  the concept behind the exhibition because it would help to make Nigerian manufacturers conscious of the quality of goods the produce and help in attracting foreign buyers.

The representative of Oando at the fair, Mrs Oluleye, said she was glad that the exhibition held, adding that it would be good if it is held annually especially next year that his company , Oando, is going to introduce new products.

The Director General and Chief Executive of SON, Mallam Farouk Salim, who was represented at the occasion, said he was happy with the level of participation at the fair.

He said that some exhibitors had been around since the event kicked off on Monday, adding that the exhibition is to showcase that Made-in-Nigeria products are certified quality wise.

He said their presence at the fair was an indication of certified products.

“All the products displayed in the exhibition were certified by SON. I am throwing  the  challenge to  every one of you here that wherever you are  SON  should be able to vouch for  you because our reputation is also at stake,” said the SON DG, who was represented at the occasion by the Director of Marketing, Lagos Zone, Mr Richard  Adewunmi.

He said that the organization was providing proper testing of locally produced goods in order to prevent them from being rejected in foreign markets and that haven worked with them over years, the organisation will always ensure that they do not have problems about the quality of their products.

PrevPreviousWhy I will not support candidate from South, by Umahi
NextSack of staff: ASCETA dares COEASUNext