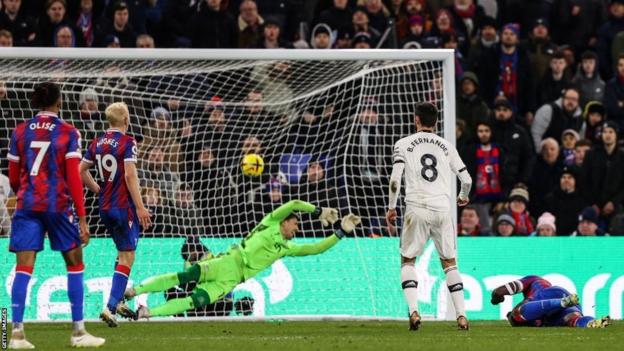 Crystal Palace’s Michael Olise scored a stunning last-minute free-kick to deny Manchester United a victory that would have taken them second in the Premier League.

United were on course for their 10th successive win after Bruno Fernandes scored just before half-time when he finished well following Christian Eriksen’s pull-back.

But Olise struck in dramatic style with a brilliant curling free-kick to ensure a point apiece.

The draw does take United above Newcastle into third but keeps them behind rivals, Manchester City, who play at home to Tottenham on Thursday.

For Palace it ends a run of three successive defeats in all competitions and Patrick Vieira’s side will feel they got a deserved point.

United goalkeeper David de Gea had produced a wonderful save to tip Odsonne Edouard’s powerful strike on to the crossbar when it was goalless, two minutes before Fernandes struck.

De Gea also made another fine stop in the 75th minute, punching away Marc Guehi’s header.

But the Spaniard was finally beaten in injury time with Olise’s brilliant 25-yard free-kick going in off the underside of the crossbar as Palace again showed their fighting spirit.

The Eagles have now secured 13 points from losing positions in the Premier League this season, only Tottenham Hotspur with 14 have recovered more.

“It feels like a win because we are happy with not losing the game,” said Vieira.

“It was tough. Important not to concede the second goal and to stay strong in the second half. We built the momentum and belief and we got rewarded with Michael’s free-kick.

“We wanted to have the ball and possession but we couldn’t because of Manchester United’s quality. We showed discipline and not conceding that second goal was important. We believed and then came the free-kick.”

Erik ten Hag handed a Manchester United debut to Dutch striker Wout Weghorst following his loan move from Burnley earlier this month, but the closest he came to scoring was when he looped a header on to the roof of the net.

Also read: Why I accepted Manchester United’s offer, by Weghorst

United, who have not won the Premier League since 2012-13, are now eight points behind leaders Arsenal, with the Gunners having a game in hand, and the two teams meet at Emirates Stadium on Sunday.

However, United will be without key defensive midfielder Casemiro as he will be serving a one-game suspension after picking up his fifth booking of the league season following a late challenge on Wilfried Zaha in the 80th minute.

The disappointment was clear for Ten Hag, although there will still be plenty of positives to take for the Dutchman.

Ten Hag was in the stands watching at Selhurst Park for United’s last game of the 2021-22 season in May when, in Ralf Rangnick’s final match as interim manager, the Eagles won 1-0.

That result saw United finish sixth in the Premier League, 35 points behind champions Manchester City, and they only just scraped into the Europa League.

But United have improved vastly since then and, following the 6-3 humiliating defeat at City on 2 October, they have now only lost once in 20 matches in all competitions.

Nevertheless, with the manner of the late equaliser, United’s fans, players and coaching staff will be annoyed at letting the win slip away.

“You don’t expect to drop points. We have to invest more to get that second goal and then not be in that situation that a lucky moment costs you two points.

“I have to criticise my team. Go for the second.”

PrevPreviousObi and the road to Chatham House
NextVote for people you know from cradle in strength, capacity to deliver – ObiNext